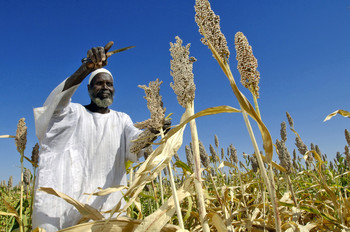 ES1. The SIFSIA programme is one ofthe first of its kind in attempting to build government capacity in terms of food security information and analysis and strengthening food security policy–making, in a ‘post–conflict’ and challenging environment.This final evaluation of SIFSIA–North aims to capture the learning from the SIFSIA experience to inform future projects of this kindin Sudan and elsewhere, as well as to review the overall performance of the programme. It focuses on the second phase of the programme following the mid–term evaluation, from January/February 2009 to October/November 2011.

ES2. The defining event, politically and economically since 2009, has been the secession of South Sudan in July 2011. Although the SIFSIA programme began during a period of unprecedented economic growth in Sudan, it is ending in an era of deteriorating economic conditions. Poverty and food insecurity have persisted throughout, but policy priorities have been dominated by concerns of macro–economic stabilisation. The rapidly evolving political context and completion of the CPA has also absorbed much government attention in recent years. This has been a challenging environment in which to implement a capacity–building programme targeted at federal government with improved food security policy–making at its heart. With hindsight, SIFSIA was an extremely ambitious programme in the context of Sudan and it was simply not possible to achieve all that it set out to do in the time available and with the resources available.

ES3. After a slow start to the first phase of SIFSIA–N, momentum has substantially picked up during the second phase of the programme and overall performance has been good. The PSU has benefited from strong management and a high–performing team of national staff has been established. A major achievement was the facilitated establishment of the FSTS, a critical first step in establishing the institutional set–up envisaged for improved food security analysis and policy–making. But a major set–back has been the continued failure to establish the FSC, the highest level inter–ministerial decision–making body. Although both FAO and the EU in Khartoum could have done more to lobby for the FSC, this has ultimately been beyond the control of the SIFSIA programme. A narrow window of opportunity now exists to establish the FSC before the programme finishes at the end of April 2012.

ES4. The technical food security information side of SIFSIA–N’s work has been particularly strong. Notable achievements include: improved rainfall monitoring using TAMSAT and more recently FAO–RFE establishment of the Food and Agricultural Market Information System updated land cover maps establishment of a web–based nutrition information monitoring system supporting the SBHS and adding a food security component which has provided valuable baseline data on food consumption patterns introduction of the IPC at federal and state levels as a popular and widely–used analytical tool that has encouraged cross–sectoral and cross–ministry coordination.

ES5. All of these have helped to fill a data vacuum on food security by contributing to the availability of more reliable and updated data and analysis. Close to the end of the SIFSIA–N programme, some of these initiatives are still being rolled out and/ or finalised, for example the web–based nutrition information system and FAMIS;this is partly a consequence of early delays in programme implementation. Some components will need follow–up financial and technical support to fulfil their potential, for example the IPC by strengthening the availability and reliability of data collected at state and locality levels. There has also been very little gender disaggregation of data nor gendered analysis, an issue that requires attention and follow–up support.

ES6. Overall, SIFSIA–N has made substantial progress in bringing together different line ministries to carry out multi–sectoral food security analysis in a culture where there has traditionally been little collaboration. However, it would take substantially longer than the duration of this programme to establish a fully integrated food security information system in the context of Sudan. Located within MoAF, agriculture and crop production have been a key focus of the SIFSIA–N programme; other sectors such as livestock have been less well–covered. In the absence of the FSC SIFSIA–N has struggled to shed the perception that it is a ‘Ministry of Agriculture’ programme. The programme’s ability to address emergency/ humanitarian food security issues has also been challenging, partly because of issues of access and partly because much of this has been conflict–related which brings its own sensitivities. Nevertheless, SIFSIA–N rightly prides itself on being one of the few sources of food security analysis across the country.

ES7. The food security policy side of SIFSIA–N’s work has been weaker. Nationalconsultants have been brought in to carry out a number of policy–related studies and research and these make a valulable contribution. However, lack of capacity–building support means that the research and reports have suffered from a lack of peer review and recommendations are often generic or unclear. The major learning from this experience is that policy–related work requires a very different skill–set to technical food security information collection and analysis, must be informed by a strong understanding of the political economy of policy–making, and must be supported by investment in dissemination and fostering policy–level debate.

ES8. Despite the challenging context in which the SIFSIA–N programme has been implemented, the record of how its materials have been used is quite impressive. SIFSIA’s work has been particularly relevant to the information needs of MoAFwith its focus on crop production and agro–meteorological monitoring.There appears to have been a high level of utilization at senior levels of government of SIFSIA’s seasonal updates and data on food prices during the 2011 agricultural season.The SBHS and the food security component that was part of it have been essential sources of information for the I–PRSP.In short, SIFSIA–N has made a significant contribution at a time when reliable data were scarceand has been welcomed by many civil servants in make the case for developing an evidence–base to inform decision–making.

ES9. There is concern about the Government of Sudan’s ability to sustain the work that SIFSIA–N has begun. Two ingredients are essential: political commitment and financial resources. The establishment of the FSC before the SIFSIA programme ends in April 2012 would be the strongest indication of political commitment on the part of GoS.The availability of financial resources, especially to cover the operating costs of different components of the system, is concerning in an era in which less resources will be available. Some elements of SIFSIA’s capacity–building efforts are well–embedded within government institutions, for example agro–meteorological, remote sensing and GIS skills within the SMA and RSA. Other elements are more vulnerable and will require continued investment of international resources and technical support, for example continued roll–out and strengthening of the IPC, the continuation of FAMIS, and support to the nutrition information system.

ES10. The evaluation makes three sets of recommendations, (i) for the final months of the SIFSIA–N programme;(ii) in order to sustain the benefits of SIFSIA–N in the longer term; and(iii) for the new food security project that will commence in 2012, targeted at state level.