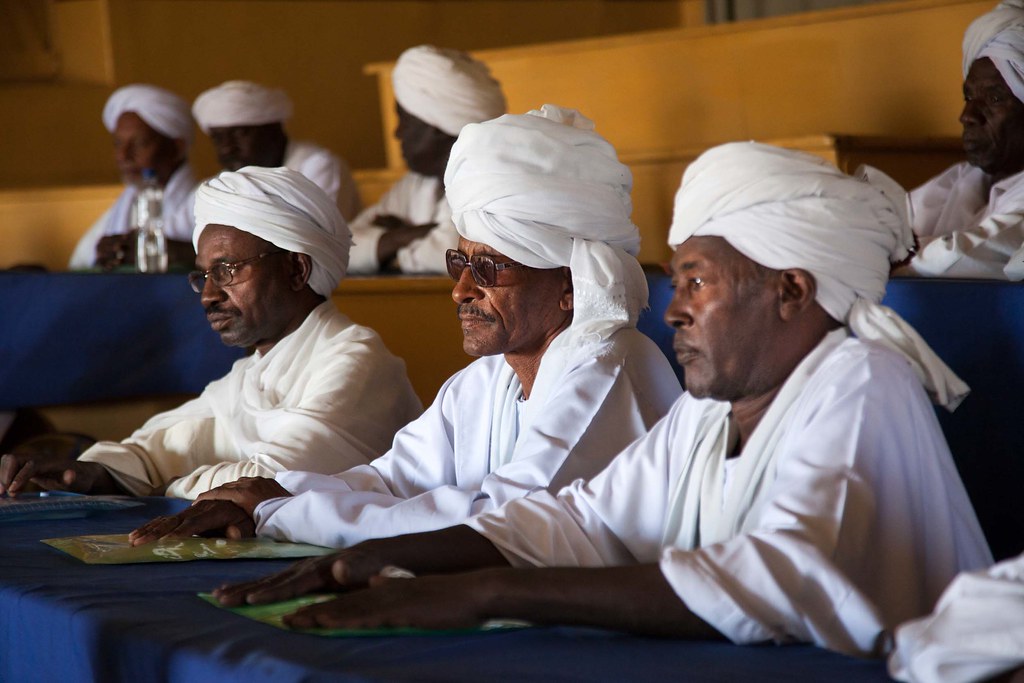 The Native Administration in Sudan is a complex institution that interacts with justice, identity, politics, and aid – as well as peace and conflict.   Many aid programmes interact with the Native Administration at different levels, such as during targeting exercises, planning access, and through community consultations.  In this blog, the CSF explores the complicated history of the Native Administration, and the implications for the aid sector today –  particularly when working in contested or conflict-prone areas.

The Native Administration was instituted by British colonial authorities seeking a pragmatic system of governance that allowed for effective control with limited investment and oversight by the state.  The three-tiered system of Sheikhs, Omdas, and Paramount Chiefs (Nazirs, Sultans, Meliks and Shartais) built on pre-existing systems of customary governance that had previously helped resolve local disputes and manage access to natural resources. The Native Administration under the colonial period also took on new responsibilities for executing policies, collecting taxes, and mobilising labor on behalf of the central government.

While the system of Native Administration has waxed and waned since the colonial period with many of its administrative roles brought under the state, it continues to hold space as a key (if often contested) interlocutor between the local community and outside actors – including government, aid actors, or other entities.

Roles in conflict and peace

Local justice and natural resource management.  Traditional authorities have historically played an important role in managing conflicts within and between communities through a number of avenues.  They ruled on disputes and sought to address grievances through courts, they allocated resources within their communities and continually renegotiated the use of natural resources with their neighbours.

Traditional authorities were often able to manage real and potential conflicts through a commitment to dialogue and a deep understanding of the land and the people around them. When the system was weakened or abolished, as happened between 1971 and 1981 as part of an agenda to ‘modernise’ governance by replacing traditional authorities with administrative councils, it left a vacuum where no institution had the responsibility for resolving local level conflicts.

However, not all groups receive equal treatment from Native Administrations. They tend not to decisions in support of women’s rights and access to land. Meanwhile, pastoralists have been largely excluded from many of the basic land rights given to more sedentary groups, which has arguably contributed to some conflicts at the same time as the institution has resolved others.

Politicisation.  In the 1990s, the ruling National Congress Party (NCP) sought to revitalise the Native Administration as a mechanism to expand its network and influence into the rural areas. “Native Administrators were brought to special training camps and instructed on how to become ‘missionaries’ to spread Islamic teachings.”[1] New Native Administration hierarchies were also established in IDP camps for those who had fled war in Sudan’s conflict-affected regions.  The purpose of these newly designated officials was to help extend the state’s control over groups that had been in conflict with the state. One of their responsibilities was to mobilise IDPs to participate in pro-NCP political rallies.[2]

While Native Administrators may not have always had the means to resist it, this politicisation has undermined their credibility among many groups. The 2018-2019 revolution saw increased tension between the Native Administration and other, oftentimes younger groups, like resistance committees or women’s groups.  In some IDP camps, these groups responded to the political shifts by holding the local Sheikhs who were believed to be corrupt to account, insisting on their removal, and on new forms of accountability over food aid delivery.[3]

Tribal vs. National Identity.  Rooted in tribal traditions rather than in nationalist movements, the Native Administration has helped to shape the ongoing debates about the basis of national or tribal identity in Sudan. This began during the colonial period, when British authorities sought to use the Native Administration as a cultural and political tool to dampen surging nationalist sentiment for independence by increasing the political relevance of the tribe and making it more difficult or undesirable for tribes to band together in pursuit of national independence.  This tactic has since been used by successive regimes for similar policies of ‘divide-and-rule.’[4]

The power of the ‘tribe’ as a political unit becomes more potent due to the rights of the ‘tribe’ over land, through land use systems that allocate ‘daar’s or homelands to specific groups based on their tribal identity. The use of tribal identity as the basis for political participation and natural resource management is at the root of some of Sudan’s conflicts, and is deeply intertwined with the Native Administration institution.

As a result, the Native Administration has its supporters and detractors. The former argue that strengthening the system is necessary to reduce conflicts as they already have a track record of resolving conflicts in locally appropriate ways and can rely on the respect of community members.[5] At the same time, others call for the abolition of tribal approaches to politics, which they claim are inherently divisive, designed to increase tribal competition and hamper national unity[6].

Consequently, aid actors should be careful to work in a complementary and supportive way with the attributes of the Native Administration that promote peace, learning from customary approaches to local dialogue and deep contextual knowledge.  However, triangulating information from diverse sources and understanding local dynamics through ongoing formal and informal analysis are essential to understanding local perceptions of both the institution and the individuals attached to it, and provide aid actors with the analysis they need to be conflict sensitive and avoid contributing to harm.

[1] Abdul-Jalil, Musa Adam. From Native Administration to Native System: The Reproduction of a Colonial model of governance in Post-Independent Sudan.   University of Khartoum.  January 2015.

[6] The Conversation. Blockade of Port Sudan: what’s behind it and what can end it. October 2021. Accessed online March 7, 2022. https://theconversation.com/blockade-of-port-sudan-whats-behind-it-and-what-can-end-it-169264

Aid in the Big Picture – What will our impact be on Sudan’s transition?
Most Recent
Auto Draft

CsfSudan - @CsfSudan
November 29, 2022, 12:51 pm
The CSF is looking for a new Learning Adviser to lead on developing and delivering the CSF learning agenda. For more information about the job description and application process https://t.co/uQ4LPmgl1b Deadline for applications: 7 December 2022 #job #Sudan #Peace #career
2 1